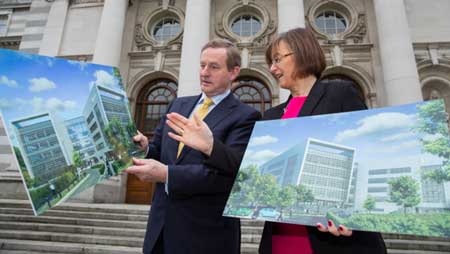 Almost 150 building jobs will be supported in the next two years for the construction of a new €134m Microsoft campus in Dublin.

The new campus will be built to house Microsoft’s 1,200-strong team under one roof for the first time in the company’s history in Ireland.

Marking its 30thanniversary in Ireland Microsoft revealed its total investment in the country amounts to €1bn, a figure that includes significant data centre investments in west Dublin. The company has also provided an estimated €30m of support to charities and non-profit organisations in Ireland through the provision of software, financial grants and expertise from employee volunteers.

Microsoft first came to Ireland in 1985, initially to pack software into boxes and ship it worldwide. Within a decade some of the earliest employees had become millionaires due to their stock options coinciding with Microsoft’s dominance of the PC market in the 1990s.

“Having grown from a small manufacturing facility with less than 100 people in 1985 to what we are today, we have a strong track record of continual investment in Ireland,” Microsoft managing director for Ireland Cathriona Hallahan said.

“Dublin is now home to a number of European and global teams and groups, as well as to the first data centre located outside the United Scales – a facility that has grown rapidly over the past five years.

“The €134m investment in a modern home for our team underpins our long-term commitment to Ireland. We are looking forward to having a great year of celebrations to mark our 30 years in Ireland and there is no better way to start the year than with this announcement.”

The new campus will be located in a wooded setting, backing onto Leopardstown racecourse.

Details of the new campus are being unveiled today at a meeting for the company’s employees.

“I am delighted to welcome Microsoft’s announcement of a new €134m state-of-the-art ‘One Campus’ in Leopardstown on the occasion of the company’s 30th anniversary in Ireland,” Taoiseach Enda Kenny, TD, said.

“This investment is truly significant and is a fantastic sign of Microsoft’s continued commitment to Ireland. The Government’s job is to build on the positive environment that exists for companies like Microsoft so they can continue to grow, create and secure jobs in Ireland.

“This is part of the Government’s plan to create 40,000 new jobs this year and return our country to full employment by 2018,” Kenny added.