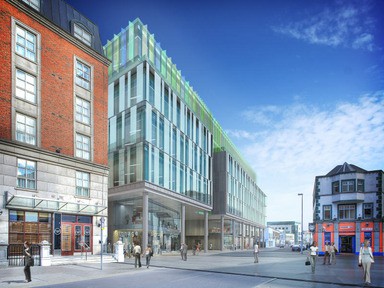 Hibernia REIT plc (Hibernia) announces it has exchanged contracts to acquire Cumberland House, Dublin 2, from Morretino Limited (Morretino) for €49m.  As part of this transaction the €38m short term secured loan provided by Hibernia to Morretino in August 2014 is being repaid along with c. €1m of accrued interest.

Cumberland House is a prominent seven storey office building of approximately 112,000 sq. ft. with parking spaces for 213 cars, which was constructed in the late 1970s.   The building is on a 1.6 acre site in a central Dublin 2 location, close to Merrion Square, Government Buildings, Trinity College and Dublin’s busiest commuter railway station, Pearse Street.  The building is largely vacant and Hibernia is in discussions with a number of prospective tenants regarding potential short term lettings.  The price paid equates to a capital value of c. €360 per sq. ft. for the existing office space.

The property has significant redevelopment potential: there is existing planning permission to replace the current building with up to 250,000 net sq. ft. of new office accommodation.  Alternatively, the existing building could be refurbished and extended.

This acquisition is Hibernia’s fifteenth since listing in December 2013: following its completion Hibernia will have invested €517m, with a further €43m committed.

“We are delighted to have agreed this transaction, which was facilitated by our ability to provide a short-term loan secured on the property to the vendor in August 2014.  Cumberland House is an important addition to our central Dublin office portfolio with exciting asset management and redevelopment opportunities and we look forward to working with potential occupiers on plans for it.”