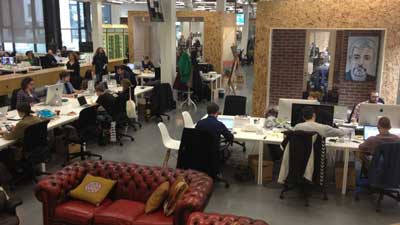 Airbnb, the world’s leading community-driven hospitality company, announced today (Friday) that it has started hiring for 200 new positions at its Dublin operation.

To meet the needs of its growing community of hosts and guests, Airbnb has commenced hiring for the new positions across all functions including customer experience, human resources, finance, trust & safety and IT.

The company has also confirmed a lease for ‘The Warehouse’, a planned 40,000 square foot contemporary office space at Hanover Quay, Dublin 2. Over the next 14 months, this 19th century derelict warehouse will undergo a sympathetic restoration and modernisation for Airbnb. The company has also taken additional space at its existing office location, The Watermarque Building in Dublin 4, to allow for its continued growth.

“It’s been almost one year since we officially opened our Dublin office and we have been really pleased with our progress so far in terms of talent and growth”, said Aisling Hassell, Global Head of Customer Experience and Head of Airbnb in Ireland.

“Our community of hosts and guests continues to thrive and Airbnb is investing further to meet its growing needs. We want to ensure we can give the very best customer experience every time someone either hosts or stays with Airbnb. Our Dublin operation is a core part of the company and we are very excited to be in a position to build on our current success”, she added.

“The Warehouse will see an old building with a rich heritage become a bright contemporary space, while retaining its character”, said Shane Scully, Director, The Reveal Developments. “We are very excited to redevelop this space in the heart of the Silicon Docks area and make it home for Airbnb”, he added.

The Minister for Jobs, Enterprise and Innovation, Richard Bruton TD, who has met senior Airbnb executives on a number of occasions in recent years, said: “A key part of our Action Plan for Jobs has been developing a cluster of internet companies around Silicon Docks to create in Dublin the internet capital of Europe. A part of this has been attracting more of the biggest names on the internet to establish and grow operations in Ireland – crucial also has been developing a cluster of Irish start-ups to build off our success in attracting these companies to Ireland. Of vital importance in all of this has been talent – ensuring, through our work permit system and through our education system that these companies, Irish and multinational, can access the skilled workers they need to grow. Today’s announcement by Airbnb, one of the most exciting companies on the internet, that it is creating an extra 200 jobs in Dublin is a huge boost to this strategy and great news for Dublin. I wish Aisling and the team every continued success”.

Martin Shanahan, CEO of IDA Ireland said: “AirBNB is one of the highest profile companies we have in the Silicon Docks area. They have hired over 300 people in Dublin in less than two years, making them one of the fastest growing companies in the country. AirBNB has found a great fit for their staff in the Silicon Docks area where they have already have one of the most modern working spaces in Dublin. Their new building will allow them to continue on their path of rapid growth.”

Airbnb currently employs approx. 300 people in Dublin. The company first announced its intention to establish an office in Ireland in September 2013 and officially opened its Dublin office here in April 2014.

Airbnb currently has over 1,000,000 listings in 190 countries across the globe. Europe accounts for almost 6 out of every 10 listings on Airbnb, while Ireland represents approx. 4,500 listings alone.