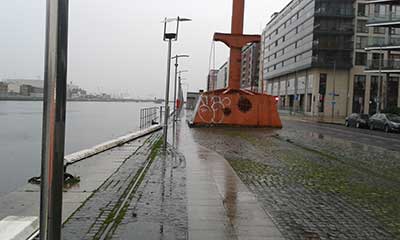 One of the most iconic sights on Dublin’s Sir John Rogerson’s Quay, although probably not identifiable for what exactly it is, will be getting a 21st century facelift.

The Diving Bell, designed in 1860, is one of the most recognisable sights along Dublin’s docks, although most people will have no idea what it is or what it was used for.

This week Weslin Construction, who have been appointed to handle the project, will begin the renovation on the Diving Bell.  This will require the installation of a 350 tonne crane on Sir John Rogerson’s Quay to move the 90 tonne Diving Bell to its temporary home, 15 metres from where it currently stands.

The Diving Bell was designed by the “Father of Irish Concrete”, the famed engineer Bindon Blood Stoney.  He was the Chief Engineer in Dublin Port at the time.  This project is one of several projects by the Dublin Port Company to rejuvenate the historical area around the Port.

When in service up until the 1960s would be lowered into position on the river bed, pumping water out and compressed air in.  This would then allow workers to level the floor of the river as they would enter a tunnel at the top of the Bell and travel down through an airlock within the structure to where they could safely work.  However they could only work in 30 minute shifts dues to the intense heat build up in the chamber.

The renovation of the Diving Bell will include specialist painting and blast cleaning. While the Bell is being renovated a new structural frame will be constructed in its original place using stainless steel panels.  The newly refurbished Bell will sit on this 2 metre high structure and below it will allow access to visitors to enter underneath and the new sensory water feature will simulate the experience of being inside a working Diving Bell.

The first lift of the Diving Bell will take place next week with the newly refurbished bell due to be lifted on to the new structure in late April.  More information on the project can be found on http://www.Weslin.ie