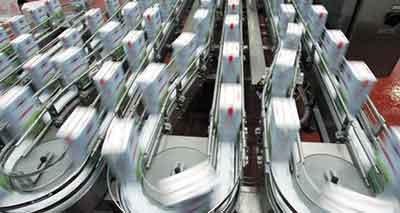 The investment has been supported by the Department of Jobs, Enterprise and Innovation through Enterprise Ireland. Construction will start immediately and Minister Bruton today turned the first sod for the new development together with Alo Duffy, Chairman of Lakeland Dairies and Group Chief Executive, Michael Hanley.

The event was also attended by the Minister for Arts, Heritage and the Gaeltacht, Heather Humphreys TD. The overall development will lead to the creation of 81 jobs across the Lakeland Dairies Group over a five year period. Up to 180 construction jobs will also be created by contractors during the building, installation and commissioning phases for the new processing facilities.

Welcoming the announcement Minister Bruton said: “Ireland’s food industry offers massive potential for regional employment, which is a major focus of the Government’s 2015 Action Plan for Jobs. The removal of milk quotas later this year offers huge opportunities that we intend to exploit in a planned and strategic way in order to support jobs growth across every region in Ireland. “Today’s announcement of 81 extra jobs in Bailieboro through a €36m investment, supported by my Department through Enterprise Ireland is a great boost for Cavan and the Border region. At the heart of our jobs plan is creating a powerful engine of Irish enterprise alongside the strong multinational sector. Investment by Irish businesses like Lakeland Dairies is more likely to be in rural areas, and has a massive knock-on impact on the local economy, through construction, supply and service businesses. With continued implementation of our plan, I am determined to ensure that we can see more announcements like this in the coming years across every region of Ireland”. One of Ireland’s leading farmer owned dairy processing co-operatives, Lakeland Dairies processes over 800m litres of farm produced milk annually into a wide range of value-added dairy foodservice products and food ingredients which it exports to over 70 countries worldwide. Following the abolition of milk quotas later this year, annual milk supply to Lakeland Dairies is expected to increase by some 40% to over 1 billion litres by 2020. The development by Lakeland Dairies is designed to ensure that the co-operative is well positioned to take advantage of all future market opportunities for its milk producers.

The expansion will see the installation of a new 7 tonne per hour milk drying facility at Bailieboro where total milk powder production capacity will increase to 19 tonnes per hour. Lakeland currently produces 80,000 tonnes of milk powders a year and this will rise to 130,000 tonnes on completion of the project in 2016. The co-operative also produces 24,000 tonnes of butter on the same site which provides for considerable flexibility in milk throughput and overall economies of scale for the food ingredients business. Commenting on the announcement Minister for Arts, Heritage and The Gaeltacht, Heather Humphreys TD said: “The creation of 81 new jobs at Lakeland Dairies and a further 180 construction jobs through the €36m investment is fantastic news for Bailieboro. The agri-food sector is a vital source of employment in Cavan and Monaghan, so I am delighted to see that Lakeland Dairies is planning to maximise on the opportunities offered by the abolition of milk quotas later this year. Companies such as Lakeland are very important to the economy in rural areas like Bailieboro. This announcement will provide a boost to the other local businesses and to the wider region.

The Government is committed to supporting the agri-food sector, which will play an increasing important role as jobs growth continues in the regions”. Lakeland Dairies’ Chairman, Alo Duffy said, “When EU milk quotas are abolished this year, Lakeland Dairies’ milk producers will have the freedom to increase milk output in line with continuing and future growth in global demand for dairy products. Lakeland Dairies is focussed on the creation of a bright and sustainable future for our milk producers. This includes investments in modern and streamlined plants which guarantee an expanded milk processing capacity and provide the flexibility to meet global market needs.” Lakeland Dairies’ Group CEO Michael Hanley said, “Growth in our global dairy ingredients business is being fuelled by consumer trends and developments in food industry sectors where we have access to key markets and customers throughout the world. Over the past five years we have transformed our processing capabilities and have also underpinned our future export potential with new global logistics facilities.

The expansion of our operations at Bailieboro will create further advantages for our milk producers. In particular, we see continuing opportunity in the areas of infant formulae, dairy proteins and health related nutritional products, among other categories, where we are a globally recognised leading supplier of the highest quality milk powders.” Michael Cantwell, Food Division Manager, Enterprise Ireland said: “Enterprise Ireland has worked closely with Lakeland Dairies in developing its expansion and investment plans for the post milk quota era. We are confident that this investment will result in the maximum return to the company and its farmer shareholders by focusing on high quality, value added milk powders for inclusion in top end applications such as nutritionally enhanced foods and infant formula. The investment will have very positive impacts for the region, not only in terms of the 81 new direct jobs it will create, but also in the indirect benefits to the local and wider economy”.