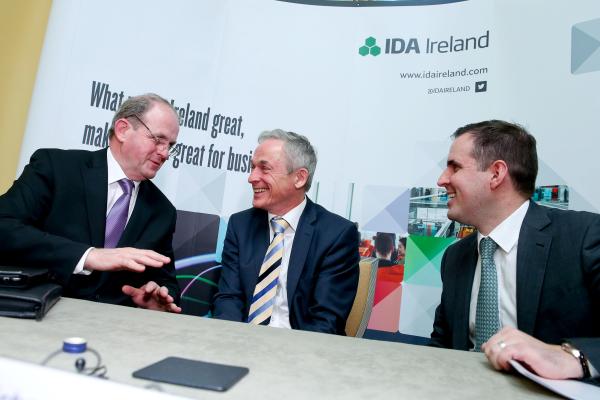 IDA Ireland, the Irish Government agency responsible for attracting foreign direct investment, has reported the creation of 15,012 new jobs by IDA client companies during 2014. When job losses were taken into account, the net increase in employment was 7,131, one of the highest net levels of job creation in a decade.

Total employment at IDA client companies now stands at 174,488 people, the highest level in the history of IDA Ireland. The job performance took place against a particularly challenging European economic environment and changing corporate taxation landscape. IDA has now exceeded the jobs and investment targets set under its Horizon 2020 strategy and is currently finalising a new five-year strategy to take the organisation into a new phase of development.

A dynamic talent pool in Ireland, improved macroeconomic conditions and a concentration on several core sectors were among the contributors to the strong 2014 performance, IDA said today.

There were job gains across most sectors IDA is focused on, but particularly in digital media/content, ICT, international financial services, life sciences and business services.

Commenting the Minister for Jobs, Enterprise & Innovation, Richard Bruton TD said: “Foreign direct investment is a central part of our Action Plan for Jobs. Multinational companies account for almost 10% of the Irish workforce and are of crucial strategic importance for the economy due to the quality of the jobs involved, their export focus and the massive knock-on impact they have on the wider economy. That is why we have put in place a range of new measures to support extra jobs in this area over the past 4 years, such as extra IDA staff in foreign markets, increased skilled graduates and an improved tax offering.

“Today’s results show that a record 7,131 extra jobs were added by multinational companies supported by IDA in 2014. This means that 25,000 extra people are at work in these companies compared to 2011 – with massive knock-on impact for the economy. Martin and his team at IDA deserve massive credit for this result – as do others right across Government.  As I say each year, the challenge now is to build on this performance and ensure that we create more jobs and more economic impact, as part of the drive to rebuild the economy and ensure that it is felt in people’s pockets – and I am confident that we can deliver on this in 2015 and beyond”.

Commenting on the 2014 figures, the Chief Executive of the IDA, Martin Shanahan said: “Our focus at IDA is real jobs, real companies and real economic impact and in that context 2014 was a very successful year. While the direct jobs created are of course welcome, we are seeing noticeable gains for the wider domestic economy from the investments made by overseas companies we work with.

“IDA Ireland would like to thank key stakeholders, including An Taoiseach, Government Ministers, specifically the Minister for Jobs, Enterprise & Innovation  and his department officials,  our sister agencies and Ireland’s embassy network for their assistance during the year. Most crucially of all, we would like to thank all the companies who created employment during 2014 in a diverse range of industries, which allowed IDA to meet its own targets, as set down in the Action Plan for Jobs. I would also like to thank the IDA staff for their dedication, professionalism and strong work ethic which has helped to deliver the strong results for 2014”.

Property/Construction Impact
IDA estimates that for every 10 jobs generated by Foreign Direct Investment (FDI), another seven are generated in the wider economy. A particularly strong economic contribution is generated from FDI investments for the property and construction sectors, which have faced unprecedented challenges over recent years.

It is estimated that approximately 10,000 people are currently employed on construction projects underway with IDA client companies, providing a considerable economic boost to the sector and the wider economy.

This secondary economic impact is of vital importance, as it provides an overall balance to the contribution FDI makes to the wider economy. Local communities and sub-contracting firms are particular beneficiaries of this activity.

Horizon 2020 set an ambitious regional economic development targets for the dispersal of investments in regions outside Dublin and Cork. While these have been challenging, 2014 saw a much improved year for regional dispersal with 37% of investments going to outside Dublin and Cork, the best performance since the current strategy got underway and up on the 30% recorded in the previous year.

There are many complex factors influencing investor location decision making: increasing preference of investors globally for cities of scale with 1milion plus population, significant challenges from lower cost locations in the UK and Eastern Europe and attractive regional aid.

In particular, companies in the emerging technology sector, due to a necessity to scale up rapidly, have a preference for locating in Dublin, which makes regional targets more challenging. However high quality investments were won in many regional locations during the year. For example there were investments announced from Jazz Pharmaceuticals in Co Roscommon, Beckton Dickinson in Drogheda, NuVasive in Waterford, Teleflex in Athlone and ClearStream Technologies in Enniscorthy.Particularly strong performances will be posted by several regions, notably the north-east and south-west.

Outlook
Commenting on the outlook for 2015, Shanahan said: “Based on the immediate IDA pipeline, covering the first quarter of 2015,, we are optimistic about the future flow of investment into Ireland. In relation to the remainder of the year we are cautiously optimistic Ireland is in a good position to win significant business across a range of sectors.

However all business is hard-won and we need to be vigilant and avoid complacency, particularly in the area of cost competitiveness. The mistakes of the past must not be repeated. A poor growth outlook for Europe will also be a challenge. Finally, the importance of the education and training sector providing a supply of talented graduates cannot be overstated.  Despite a challenging environment, IDA is confident it can turn in a strong performance in 2015, particularly building on the new strategic direction we will set for the organisation shortly”.