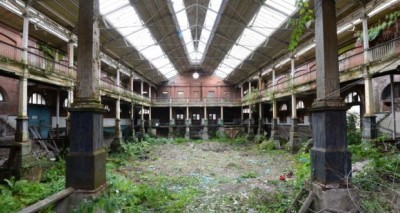 Work on a €90 million redevelopment of Dublin’s historic Iveagh Markets is to get under way this spring, more than 20 years after its regeneration was proposed.

The restored and extended late Victorian building on Francis Street in the Liberties will house a food market, with a focus on Irish produce, a craft and clothing market, restaurants, a craft brewery and distillery and an exhibition/performance area. Adjoining protected structures will be converted into a 97-bedroom hotel.

The scheme also incorporates the neighbouring Mother Redcaps Market, a pub and music venue until about 10 years ago, which will be turned into an aparthotel of 38 one-bed and 41 two-bed units.

Construction of the development, which is being undertaken by Temple Bar hotelier and publican Martin Keane, is expected to start in the coming months and be completed in 2017.

The Iveagh Markets were built in the early 1900s by the Guinness family to house street traders who had been displaced by the construction of the nearby Iveagh Trust housing development on Patrick Street, and handed over in trust to Dublin Corporation. Traders were initially reluctant to move indoors, but following an arbitration process which resulted in a compensation package they took up their new pitches in the market in September1907.

The building was split into two markets, a “dry” clothes market fronting on to Francis Street and a “wet market” to the rear, selling fish, fruit and vegetables, accessed from the entrance on John Dillon Street. There was also a laundry and delousing house in an adjoining building.

The corporation, now the city council, continued to operate the market throughout the 20th century, but by the 1980s it had become very rundown. In 1993 the council announced plans for a £1.25 million refurbishment, but over the following years it became clear this sum would be inadequate.

In 1996, the council announced it was seeking a private developer to regenerate the market. The following year Mr Keane secured the tender with a 500-year lease on the building. However the development became mired in an ownership row between the corporation and the Guinness family-controlled Iveagh Trust. The dispute was not resolved until 2004. Mr Keane applied for planning permission, which was granted by An Bord Pleanála in 2007, but before he could act on it, the recession hit and lending institutions shut up shop.

“By the time we got permission, the banks, which had been very positive, had started to change their mind and then very quickly everything came to a grinding halt,” Mr Keane said.

His planning permission was due to expire in 2012, but he secured a five-year extension from the council and has been able to secure new investment for the project. However the building, which has been unoccupied for at least 15 years is now in a very poor state of repair, and the work required for its redevelopment, along with the construction of the two hotels, is extensive.

“In total,” Mr Keane said, “when the work on the plazas and new walkways is taken in, it will cost more than €80 million, nearer to the €90 million mark.”

He is anxious to stress that the project is “debt free” with no Nama involvement. Up to 400 jobs would be created in the construction phase and about 600 permanent jobs. “The market will offer the best of Irish food, crafts and design and provide great opportunities for Irish craftspeople, form bakers to artisan bronze workers to young Irish fashion designers,” he said. Source: The Irish Times